Sept. 11- Journaling about the day

I spent the morning in front of the television watching the families reading the names of the fallen at ground zero in New York City as I do every year. I sit there and cry even though I was among the fortunate, I did not loose a loved one that day. I do know someone who did. My husband works in NYC and he heard the sound of the plane hitting the first tower as he walked to work that morning. I was out walking my dog and came home to check the answering machine (something I usually forget to do) and received his message "I'm okay, turn on the tv and call me." Pretty cryptic but I did just that and watched the coverage in disbelief as I called. He told me he was okay, but that he would not be coming home that night, since he worked in the media and he knew it would be a long day and night ahead. I watched the surreal as that second plane hit, knowing that this was no accident and that there was more to come. I called the school where my kids were, trying to get a message to them that their daddy was safe but that message did not get to them before the news did- their classmates were getting pulled out of school, some of them lost their moms and dads that day.

I always feel drained by the day, and I am one of the fortunate ones. I looked back at my journals and wasn't all that surprised that I hadn't journaled about it at the time. In fact it was only the five year anniversary that I made an attempt to get something in my journal to document the day in a graphic way. 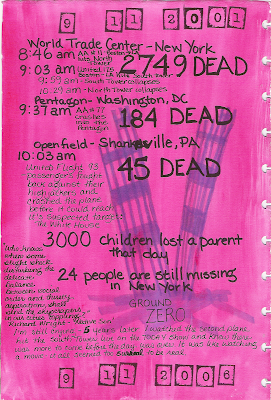 I haven't done a page since then. Since it's the 10th anniversary, I want to do one now, so I've been trying to work on one, but it is slow going. I had hoped to post something tonight, but these things take time.

Let us remember the fallen, the families, the first responders and our military and their families.