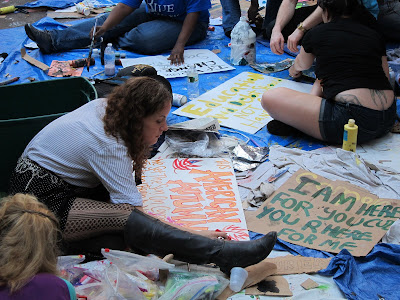 I spent some time on Sunday visiting the demonstration at Zuccotti Park, otherwise known as Occupy Wall Street. There was a variety of signs proclaiming a wide array of views, most home made on whatever cardboard was handy. Some signs were more graphically pleasing than others, but that's not what's really important. What is important is that American citizens were exercising their freedom of speech, speaking up against things they see happening that they disagree with in our country. I saw a cross section of Americans, young and old, some quietly holding up signs, some singing protest songs, others making noise on bongos and other noise makers drawing attention to the louder voices and a very interesting emaciated bull someone had constructed and covered in gold (remind you something?) I saw people having engaging discussions with other demonstrators as well as tourist (like myself) who came to just witness what was happening for themselves without the media spin.

As for all of the politicians, bankers, media pundits and other nay sayers claiming these people are unAmerican, dangerous mobs, etc, I think they doth protest too much. They obviously know deep down that what they have done to our country is wrong and they desperately want to shift the focus away from having what they've done come under any more scrutiny. What I saw on Sunday, was a calm center of people who believe they have to say something, or as I saw on one woman's jacket "If you don't stand up for something, you'll fall for anything."

The above photo was taken by my husband, Conrad, and used with his permission. Please visit his blog, Interesting in NYC all this week to see more photos from Occupy Wall Street.
Posted by Dianne Forrest Trautmann at 5:31 PM